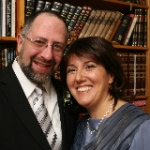 Rabbi Ian Goodhardt became a rabbi in 1988 and has served communities in Reading and Leeds in the UK and Melbourne Hebrew Congregation in Australia. He became acting rabbi of the Blake Street Hebrew Congregation in January 2009 and was made permanent in November of that year. Ian has degrees in Philosophy and Jewish Studies and Masters degrees in Counselling and Conflict Resolution. He has worked as a Family Law mediator since 2003 and run a small counselling and mediation practice. He still teaches the nationally accredited Vocational Graduate Diploma of Family Dispute Resolution. He and his wife, Sharon, have five sons, two daughters-in-law and two grandsons.