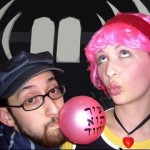 Watch the video: We Steal Lyrics from God

Stereo Sinai shared these videos during their talk.

Dubbed “biblegum pop,” Stereo Sinai‘s signature sound is the heretical combination of ancient, holy tongues with blasphemous backbeats and synthesized pop melodies. If Kelly Clarkson and A-Ha had been on the mountain with Moses, they would have come down sounding a lot like this band. They have been hailed by critics as “ethereal,” “compelling,” “one of the most innovative new bands on the Jewish music scene,” and “relentlessly cute.” The duo, made up of singer/songwriter Miriam Brosseau and songwriter/producer Alan Jay Sufrin, released their debut double-album, “Biblegum Pop” and “The Revelation Will Not Be Televised” in December, 2011. Find more about their music and performance dates on their website.