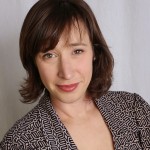 Drawing Meaning out of Text (Literally)

Tanach is full of heroes AND villains AND fools (oh my)! Delve into texts through a new lens: filmmaking. We will explore together how cartooning, voiceover and creative anachronism are exciting new ways of doing midrash, using one example G-dcast has produced – Judges – and one we’d like to, with your help – Samuel!

Sarah Lefton is the founding Director of G-dcast, a Jewish new media studio the press calls “the Schoolhouse Rock for Jews.” She ditched the first tech boom after stints at NYU’s Interactive Telecommunications Program, The New York Times, the Village Voice, and several start ups for social entrepreneurship in the Jewish community. Jewish literacy is her passion. At G-dcast, Sarah has produced over 100 animated shorts and 10 mobile apps that have been featured on NPR, in the Wall Street Journal and CNN.com. She is a recipient of the Pomegranate Prize for educators, the Joshua Venture Group fellowship for Jewish social entrepreneurs, and was named one of the “Forward 50″ most influential Jews by the Forward newspaper.