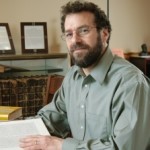 A Kiss is Just A Kiss? Mystical Union, Personal Salvation, and World Redemption through Kabbalistic Kissing

In this talk, Professor Joel Hecker will discuss the diverse meanings ascribed to kissing in Jewish mystical literature. The Zohar, Judaism’s central and canonical mystical text, depicts kissing as the avenue through which an individual unites with God, angels, the Torah, and one’s fellow (same- or other-sex). There is a reciprocal transfer that occurs in a human kissing that leaves two individuals forever changed, infused with holiness and bliss.

Joel Hecker, Ph.D., is completing the last two volumes of the first complete annotated translation of the Zohar, the central and canonical text of Jewish mysticism. He is currently Chair, Department of Modern Jewish Civilization and an Associate Professor of Jewish Mysticism at the Reconstructionist Rabbinical College. He has been a fellow at the Center for Advanced Judaic Studies at the University of Pennsylvania; served as a visiting instructor at the University of Pennsylvania, the Jewish Theological Seminary and Yeshiva University; and lectured at a range of universities, a host of adult-education institutions and synagogues of all four major denominations.

He holds an H.B.A. in English literature from the University of Toronto, rabbinic ordination and M.S. in Jewish philosophy from Yeshiva University, and a doctorate in Judaic Studies, specializing in Jewish mysticism, from New York University.