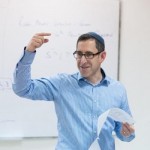 Teaching in English from Nashville, TN, USA | Presented by Jewish Nashville, courtesy of the Pardes Institute

Rachel and Leah, sisters, are both married to Jacob. Their bitter struggles and fierce rivalry are a product of their family life. We shall trace the differences between these two women who become the matriarchs of the Jewish people. What does this conflicted relationship portend for their children, and for the future of the Jewish People? With this gene-pool what are the prospects for Jewish Unity? With insights from Rashi, Ramban, Ibn Ezra, Rabbi Steinsaltz, Rav Kook and others, Rabbi Alex Israel will discuss sibling rivalry, whether conflict is always bad, and the implications of Biblical stories for Jewish unity today.

Rabbi Alex Israel teaches at Yeshivat Eretz Hatzvi and at the Pardes Institute of Jewish Studies where he serves as Director of Community Education and the Summer Program. He is a popular lecturer at campuses and communities on three continents. In 2013, he published his first book: “I Kings: Torn in Two” a commentary to Sefer Melakhim. Born and raised in London, Rabbi Israel was an active youth leader in Bnei Akiva and was the director of the Sixth Form study centre at LSJS. He moved to Israel in 1991 and gained rabbinic ordination from the Israeli Chief Rabbinate following several years of study at Yeshivat Har Etzion. Rabbi Alex Israel holds degrees from London School of Economics, the Institute of Education, London, and Bar Ilan University. Rabbi Israel lives in Alon Shevut, Gush Etzion, with his wife Aliza and their four wonderful children. He enjoys running, music and everything to do with contemporary Israel.