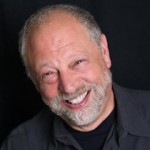 Desire: It’s Good For You! The Body, Sexuality and Fat Rabbis in the Talmud

Can you imagine a prominent citizen walking up to a pair of rabbis and saying, “You two are so fat that when your bellies touch a pair of oxen would be able to go in between them!” Or seeing a Jewish gladiator jump into a river to meet a beautiful woman only to find that she was…a rabbi?

Can’t imagine it? Well, the Talmud can!

Love! Desire! Jewish Gladiators! (Really, a Jewish gladiator). We will discover the Talmudic imagination concerning the body and sexuality by reading very funny farcical tales (or are they) about Fat Rabbis, Rabbi Yohanan and Reish Lakish.

Peretz Wolf-Prusan is the Senior Educator of Lehrhaus Judaica. From 1975 to 1985 he was actively involved in informal education (UAHC Camp Swig) and in the creation of Jewish scribal art (ketubbot and posters). From 1985 to 1990 he attended the Hebrew Union College-Jewish Institute of Religion, receiving his MAHL and Rabbinic Ordination. From 1990 to 2010 he served Congregation Emanu-El of San Francisco as Rabbi and Educator, and in 2002, he was awarded the Covenant Award as “An Exceptional Jewish Educator who has had a significant impact on others, in recognition of his outstanding contributions to the transmission of Jewish knowledge, values, and identity.” At Lehrhaus since 2010, he is engaged in community education for the Bay Area, focusing on conferences, retreats, tours, the Bay Area Community Talmud Circle, and Lehrhaus Philosophy Circle.