Rabbi Steinsaltz is internationally regarded as one of the greatest rabbis of this century and of the last.

Born in Jerusalem in 1937 to secular parents, Rabbi Steinsaltz studied physics and chemistry at the Hebrew University. He established several experimental schools and, at the age of 24, became Israel’s youngest school principal.

Rabbi Adin Steinsaltz is the first person since the medieval sage Rashi to have completed a full translation of and commentary on the Babylonian Talmud.  In 1965, he began his monumental work; this historic achievement was commemorated in 2010 by the inaugural Global Day of Jewish Learning, which has since become an annual international event in over 40 countries. The debut volumes of the English edition of Rabbi Steinsaltz’s Hebrew Talmud garnered a 2012 National Jewish Book Award.

Jewish lore is filled with tales of formidable rabbis. Probably none living today can compare in genius and influence to Adin Steinsaltz, whose extraordinary gifts as scholar, teacher, scientist, writer, mystic and social critic have attracted disciples from all factions of society.
–Newsweek 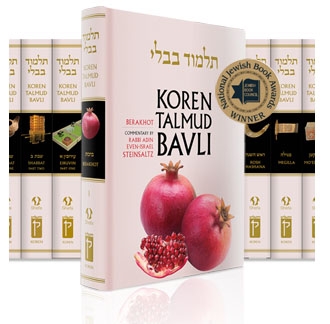 Other honors include Israel’s inaugural Israeli Presidential Award of Distinction, the Israel Prize, and the French Order of Arts and Literature. The Rabbi’s classic work of Kabbalah, The Thirteen Petalled Rose, was first published in 1980 and now appears in eight languages. In all, Rabbi Steinsaltz has authored over 60 books and hundreds of articles on subjects ranging from zoology to theology to social commentary. Renowned as an original and open minded thinker, Rabbi Steinsaltz is the author of over 60 books and has lectured and taught in literally hundreds of communities around the world.

Rabbi Steinsaltz’s mission is to “Let My People Know” and has dedicated his life to Jewish learning.  With projects such as The Global Day and the Aleph Society’s, Rabbi Steinsaltz is removing obstacles to Jewish learning for Jews everywhere. He has been hailed by Time Magazine as a once-in-a-millennium scholar – beyond translating the Talmud he has made it more accessible to more Jews than ever before.

Learning cannot be delegated to a special class or sect of people to do. Each individual must do it for himself and herself…Encouraging Jews to study is not just to educate them but to transmit  to them what we ARE.
–Rabbi Adin Even-Israel Steinsaltz

Continuing his work as a teacher and spiritual mentor, Rabbi Steinsaltz established a network of schools and educational institutions in Israel and the former Soviet Union. He has served as scholar in residence at the Woodrow Wilson Center for International Studies in Washington, D.C. and the Institute for Advanced Studies at Princeton University. His honorary degrees include doctorates from Yeshiva University, Ben Gurion University of the Negev, Bar Ilan University, Brandeis University, and Florida International University.

Rabbi Steinsaltz lives in Jerusalem with his family.