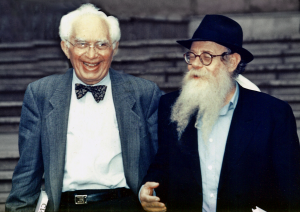 We dedicate the Global Day of Jewish Learning

to the memory of Ralph I. Goldman z”l

“I’m a civil servant of the Jewish people” – Ralph I. Goldman

There was only one title that Ralph Goldman claimed for himself: “civil servant of the Jewish people.” During his 100 years of life, Ralph both served and led the Jewish people, most notably at the helm of the American Jewish Joint Distribution Committee. More than almost anyone, he helped steer the course of 20th century Jewry.

Ralph worked under Teddy Kollek, (later the legendary Mayor of united Jerusalem) as a purveyor of ships, arms and goods during the War of Independence. He then served David Ben-Gurion, Israel’s first Prime Minister, in securing American support for the newly-created Jewish State.

“They say a person has to decide what to be and what to do. What to be comes from nature. What to do comes from vision. And Ralph had a rare combination of the two.” – Shimon Peres

In later years, Ralph raised the funds to establish Israel’s high school system and its community centers. He promoted Israeli artists, writers and musicians. His wisdom and foresight – and his many communal connections – were key in establishing the Israel Museum. As the leader of the Joint, he created channels for Soviet Jews to emigrate and helped to lead the exodus of Ethiopian Jewry. Under Ralph’s aegis, the Joint expanded its work in Israel, Eastern Europe and Latin America.

Ralph adored the Jewish people – and profoundly loved its heritage. Steeped in the Bible, he would quote its verses in conversation. He opened cultural centers in the former Soviet Union. At a critical moment for the monumental endeavor of the Steinsaltz Hebrew Talmud – when a funding shortage threatened the entire enterprise – Ralph understood the enormous importance of this asset of Jewish culture and persuaded the JDC’s leadership to step in and make it accessible to every Jew.

“He was all about the Jewish people…dedicating his life and career to strengthening Israel, and to ensuring the survival and vibrancy of the Jewish people and communities worldwide” – Alan H. Gill, CEO (American Jewish Joint Distribution Committee)

We will always miss – we can never replace– Ralph’s shock of white hair, his dapper bow ties and his huge, huge grin. But as we name the Global Day of Jewish Learning in his memory, we are inspired by his life and lifted by his legacy.

For more about the life and legacy of Ralph Goldman, visit the JDC website’s tribute page.

Ralph Goldman and Rabbi Steinsaltz shared a passionate commitment to the Jewish people. Their friendship spanned three decades, lasting until Ralph’s death in 2014. They supported each other’s efforts to strengthen and unite the Jewish people worldwide—with Ralph and the JDC supporting the Rabbi’s publications and Rabbi Steinsaltz serving on the Board of Directors of the JDC. They were both especially committed to revitalizing Jewish life in the Former Soviet Union.

The Global Day and Ralph Goldman

The Global Day is honored to be dedicated to the memory of Ralph I. Goldman. His commitment to the global Jewish people will always inspire us. Through texts and discussions that span six continents, the Global Day of Jewish Learning reflects Ralph’s vision: “there is a single Jewish world: intertwined, interconnected.”

Read more about Ralph Goldman and “The Greatness of the Jewish People” at eJewish Philanthropy.

The Global Day and the JDC

The JDC is the key international partner of the Global Day of Jewish Learning. We appreciate all of the ways the JDC strengthens Jewish life around the world. And we especially value their support in bringing the Global Day and Jewish learning to communities across the continents.

“There is a single Jewish world: intertwined, interconnected” – Ralph I. Goldman, via JDC’s Entwine