The Aleph Society is the parent organization of the Global Day of Jewish Learning. Founded in 1988, its mission is to expand Rabbi Adin Even-Israel Steinsaltz’s goal of the development of Jews, Jewish identity and Jewish communities. With operations in Israel, Russia, the United States, and the United Kingdom, The Aleph Society has given Jews everywhere access to fundamental texts, the skills with which to understand those texts, the motivation to study, and an appreciation for the contributions of fellow Jews of all backgrounds.

Rabbi Steinsaltz is a teacher, philosopher, social critic and prolific author who has been hailed by Time magazine as a “once-in-a-millennium scholar.” His lifelong work in Jewish education earned him the Israel Prize, his country’s highest honor.

Born in Jerusalem in 1937 to secular parents, Rabbi Steinsaltz studied physics and chemistry at the Hebrew University. He established several experimental schools and, at the age of 24, became Israel’s youngest school principal.

In 1965, he began his monumental Hebrew translation and commentary on the Talmud, which was completed in 2010. The Rabbi’s classic work of Kabbalah, The Thirteen Petalled Rose, was first published in 1980 and now appears in eight languages. In all, Rabbi Steinsaltz has authored some 60 books and hundreds of articles on subjects ranging from zoology to theology to social commentary.  In 2012, Koren Publishers released the Steinsaltz English edition of the Koren Talmud Bavli.

Read more about Rabbi Steinsaltz and his work. 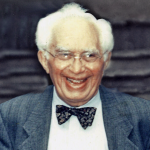 There was only one title that Ralph Goldman claimed for himself: “civil servant of the Jewish people.” During his 100 years of life, Ralph both served and led the Jewish people, most notably at the helm of the American Jewish Joint Distribution Committee. More than almost anyone, he helped steer the course of 20th century Jewry.

Ralph adored the Jewish people – and profoundly loved its heritage. Steeped in the Bible, he would quote its verses in conversation. He opened cultural centers in the former Soviet Union. At a critical moment for the monumental endeavor of the Steinsaltz Hebrew Talmud – when a funding shortage threatened the entire enterprise – Ralph understood the enormous importance of this asset of Jewish culture and persuaded the JDC’s leadership to step in and make it accessible to every Jew.

We will always miss Ralph’s shock of white hair, his dapper bow ties and his huge, huge grin. But as we name the Global Day of Jewish Learning in his memory, we are inspired by his life and lifted by his legacy.

The Shefa Institute is the coordinating organization for Rabbi Adin Steinsaltz’s worldwide educational and publishing efforts. Its constituent institutions in Israel include the Mekor Chaim network of elementary and high schools, and the Tekoa yeshivat hesder, which together educate over 1,000 students. In the former Soviet Union, the Institute for Jewish Studies in the CIS runs informal education programs that have engaged over 21,000 individuals. For over 40 years, the Shefa Institute has been the spiritual home of Rabbi Steinsaltz’s Talmud project and scholarly endeavors.

The Global Day of Jewish Learning

Headquartered in New York City, The Global Day is operated by staff members of The Aleph Society. In 2010, The Global Day was created to celebrate the completion of 40 years’ work by Rabbi Steinsaltz in translating the Talmud. Over the course of ten years, this project has grown to involve more than 500 communities in over 40 countries worldwide.