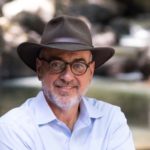 Rabbi Marcelo Bronstein was born in Argentina. He earned a degree in Clinical Psychology at the Universidad de Belgrano, and after concluding two post-graduate programs he emigrated to the United States to complete his rabbinic studies. He obtained a BA and MA in Jewish studies and attained rabbinic ordination from the Hebrew Union College in New York City. He also studied at the Seminario Rabínico in Argentina and in Israel. Rabbi Bronstein spent twenty-three years as a senior rabbi at the world-renowned Congregation B’nai Jeshurun in New York. He has served on the boards of health, ecology, interfaith, special needs, and social justice organizations in America and abroad. Rabbi Bronstein’s reverence for nature led him to move together with his wife, Karina Zilberman, to “La Ecovilla,” in Costa Rica: a 21st century sustainable community that he now calls home. He is currently a part-time rabbi at congregation B’nai Jeshurun. He has his private practice as a mentor/coach in Costa Rica, where he sees clients in person and online.