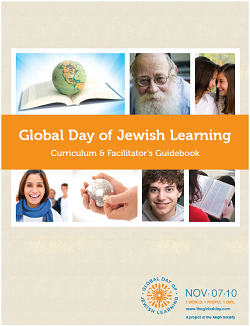 The first Global Day of Jewish Learning was held on November 7, 2010. The curriculum featured excerpts from the Babylonian Talmud, Tractate Ta’anit. The event was organized in order to mark Rabbi Steinsaltz’s completion of his Hebrew translation and commentary of the Talmud – a project which lasted nearly half a century. The following is taken from, “In Preparation for this Day,” which appeared in the 2010 Curriculum Guidebook:

“During the past fifty years, Jewish life has witnessed a renewed passion for Jewish study in general, and the study of Talmud in particular. Early on, Rabbi Adin Steinsaltz understood that many Jews, in Israel and throughout the world, yearned to have access to Talmud study, but required a text that was more accessible to a modern reader. This desire for accessibility without sacrificing authenticity gave birth to a lifelong project known worldwide as The Steinsaltz Talmud. The project was nothing short of revolutionary. The readable translation alongside the vocalized and punctuated Talmud gave access to many for whom the Talmud was a closed book. Jews from all walks of life awaited each successive volume with tremendous enthusiasm. Forty-five years, and tens of thousands of learners later, this daunting task is about to be completed. Fueled by his passionate axiom “Let my people know,” Rabbi Steinsaltz has completed this amazing gift to the Jewish people.

“The Global Day of Jewish Learning was conceived in order to celebrate this monumental achievement. Because so many Jews have been enriched by this work, it is only fitting that representatives from the entire Jewish community come together to mark this special day. In keeping with his vision, we have endeavored to make this curriculum accessible to those who have never studied Talmud before as well as to those who are seasoned scholars. The only thing required to bring to the text is one’s unique life experience. This is the context necessary for delving deeply into the passages that have been selected for today’s learning.”