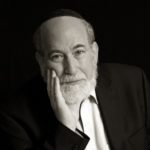 This video is now available to watch

Join Rabbi Telushkin as he discusses his book, Words That Hurt, Words That Heal, to illuminate the powerful effects we create by what we say and how we say it.

Rabbi Joseph Telushkin is a spiritual leader and scholar, and the author of 15 books, including Jewish Literacy and The Book of Jewish Values. He is also a senior associate of CLAL, the National Jewish Center for Learning and Leadership; a board member of the Jewish Book Council; and the Rabbi of the Los Angeles-based Synagogue for the Performing Arts. Rabbi Telushkin is renowned for his warmth, his erudition, and his richly anecdotal insights. His book Words That Hurt, Words That Heal is out in a new edition, which focuses on the words we use in public and in private, revealing their tremendous power to shape relationships. With wit and wide-ranging intelligence, Rabbi Telushkin explains the harm in spreading gossip, rumors, or others’ secrets, and how unfair anger, excessive criticism, or lying undermines true communication. By sensitizing us to subtleties of speech we may never have considered before, he shows us how to turn every exchange into an opportunity. Rabbi Telushkin lives in New York City and lectures regularly throughout the United States.