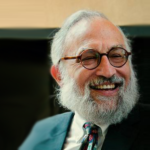 Feedback that Works: The Art of Tochecha

This video is now available to watch | Presented by Reconstructing Judaism

Join Rabbi David Teutsch and Reconstructing Judaism for this LIVE presentation from Media, Pennsylvania. We will begin with what Rambam (Maimonides) says about the obligation to offer rebuke and what makes such conversations effective, consider some contemporary situations that need our feedback, and talk about how we overcome our internal resistance to addressing wrongdoing.

Rabbi David Teutsch is the the Louis & Myra Wiener Professor Emeritus at the Reconstructionist Rabbinical College, where he previously served as President for a decade and as Director of the Center for Jewish Ethics. Rabbi Teutsch is a past president of the Society of Jewish Ethics and of the Academic Coalition for Jewish Bioethics. A past member of the Conference of Presidents, he has served on the boards of over a dozen other organizations, including schools, synagogues, and magazines.

A renowned lecturer, consultant and trainer, he has previously served as Executive Director of the Federation of Reconstructionist Congregations and Havurot, as Program Director of CLAL, and as a congregational rabbi. An honors graduate of Harvard University ordained by Hebrew Union College-Jewish Institute of Religion, he earned his Ph.D. at the Wharton School, where his dissertation dealt with organizational ethics. He has received honorary degrees from the Jewish Theological Seminary, Hebrew Union College and Reconstructionist Rabbinical College.

His recent work, A Guide to Jewish Practice: Everyday Living won the Kraft Prize, the National Jewish Book Award for Contemporary Jewish Life and Practice. The second and third volumes, A Guide to Jewish Practice: Shabbat and Holidays and A Guide to Jewish Practice: The Life Cycle, were published in 2014. Rabbi Teutsch was Editor-in-Chief for the groundbreaking seven-volume Kol Haneshamah Reconstructionist prayer book series. His textbook Making a Difference: Jewish Leadership and Not-for-Profit Management, came out in 2009. He is also the author of Spiritual Community: The Power to Restore Hope, Commitment and Joy and dozens of other books and articles.